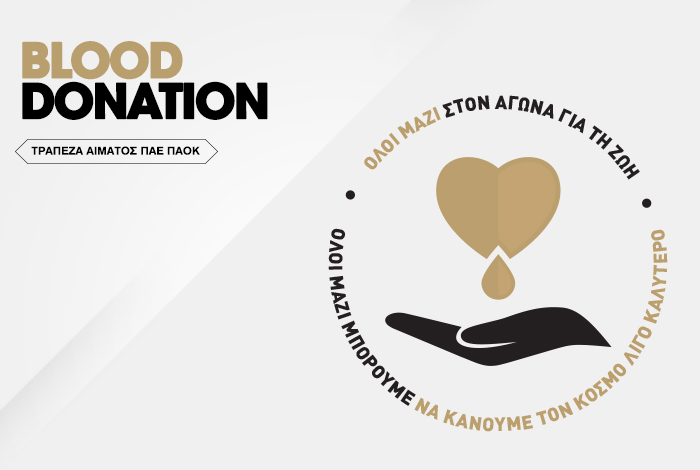 PAOK FC invites all club fans in the voluntary blood donation event to be held, Thursday 26.11, at the Toumba Cultural Centre in partnership with the “Theageneion” Cancer Hospital in Thessaloniki, to support PAOK FC’s Blood Bank.

On a daily basis, our fellow humans fight their own struggle for life; by signing up for voluntary blood donation we all become their best teammates. Blood donation is an act of generosity and solidarity, a gift of life to our fellow people. So, we invite you to substantially foster this blood donation campaign since the need for blood has increased nowadays.

All voluntary blood donors may come to the Toumba Cultural Center (57, Kleanthous str., opposite Toumba Stadium) on Thursday 26.11, before PAOK FC’s match against Gabala, from 16:00 to 20:00. This blood donation event will be supported, in the context of their scheduled events against racism, by the PAOK Fan Clubs that released the following:  “We invite all PAOK fans to take part since by giving blood, we also give life to our fellow humans in need”.

Moreover, an one-day event on fighting racism will be held, Monday 23.11 at 21.00, t the Cultural Centre’ speakers will be PAOK U-teams coach Pablo Garcia, Dimitris Tsiaras from the Thessaloniki Initiative against racism, a spokesman of the Thessaloniki Social Clinic and our very own and socially active f. Christos Mitsios.

All together in the fight for life!

Together, we can all make our world a better place to be!

A donor gives 450 ml of blood and this volume is swiftly restored; plasma is reproduced within 24 hours and red cells within a month.

No drug my substitute human blood or plasma needed by patients.

A person should donate no blood no sooner than 3 months after his/her previous donation.

It is advisable that the blood donor is well-rested and has slept 6-7 hours at least on the previous night.

Prior to blood donation, light breakfast should have been taken or 4 hours should have passed after lunch –preferably light as well.

No alcoholic drinks must be consumed.

A donor should be given some food and not leave the Blood Donation Unit before being allowed to by the competent personnel.

No smoking is allowed for one (1) hour.

No driving is allowed for one (1) hour.

No intense work-out is allowed on the day of blood donation.

Lots of fluids and a good lunch are recommended on the day of blood donation.

No alcoholic drinks may be consumed after donation.

In case of bleeding at the point of venipuncture, a donor must raise his/her arm and apply pressure.

Bandages may be removed after 2-3 hours.

For any problem or enquiry, blood donors should contact the unit’s nursing staff or physician.