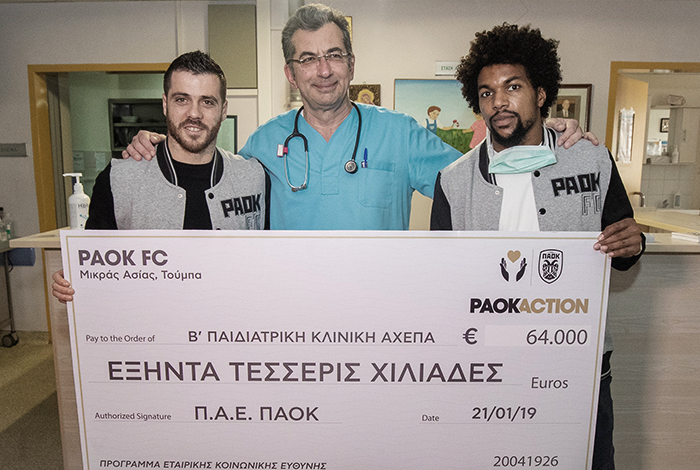 Football is just a game. It affects millions of people, but remains just a game. The value of human life, the right to hope and dream, ensuring a better future for younger generations are way more important issues. PAOK FC make sure that children have what it takes to keep struggling against a cruel destiny. Because PAOK are more than just a club.

Establishing the program PAOK Action was probably the first thing Ivan Savvidis did after taking over the reins of the club. As time goes by, this program becomes stronger, more active, aiming to help more children and families in need of our support.

One of the main functions of PAOK Action is financial support for the Child-Oncology Ward of AHEPA Hospital. This is actually a… heritage from the late Giorgos Pantelakis’s administration. The latter practically created this ward that has been counting on the support of Mr Savvidis during the last six years.

On Monday (21.01), André Vieirinha and Diego Biseswar represented PAOK FC at the annual event of the € 64.000 cheque handover to AHEPA. In the six years that Mr Savvidis is supporting the Child-Oncology Ward of AHEPA, he has contributed to the purchase of medical equipment, the payroll of 14 doctors working (in the past and now) in the Ward, caring for hundreds of children hospitalized at AHEPA.

The two PAOK players offered presents to the children who are fighting a battle for their lives. The footballers were welcomed by Dr Andreas Giannopoulos, associate professor of Aristotelio University of Thessaloniki and Director of the 2nd Child-Oncology Ward of AHEPA Hospital. Dr Giannopoulos underlined that the clinic is operating thanks to PAOK FC and defined the players as “family”.

“Nobody is alone with PAOK by their side”